The Small Behemoth: The Case for Dunkirk as Best Picture
by Justin Norris 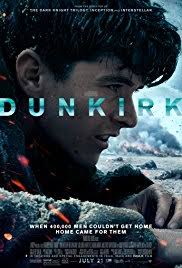 We surround you. This is what the retreating Allied soldiers in Christopher Nolan’s epic war movie, Dunkirk, find written on propaganda raining from the skies above them, like a cruel gift from the heavens. Like the fast encroaching enemy in the film, Nolan, in his most accomplished film to date, surrounds the viewer with an exhilaratingly tension filled movie that may just be the best film of the year.

The true feat of Dunkirk is Nolan’s unique approach to a story, that in the hands of another filmmaker, would almost surely become just like any other war film that came
before. However, by a making a war film that is told through three separate stories on three separate timelines all involving the same event, Nolan brilliantly utilizes the aspect of non-chronological storytelling that he used in Memento, and places it into a big budget summer blockbuster, creating the most unique war movie in recent history. Nonetheless, truly great films are made up of more than just a single, quirky schtick and Dunkirk is no exception. Beginning with an opening sequence that acts as the perfect microcosm of what makes the movie truly great, the sequence combines a beautiful and terrifying mixture of stunning cinematography, pac

ing, impeccable sound design and music as the film opens with the unforgettable image of soldiers surrounded by ever so slowly falling flyers creating a scene that is both quiet and foreboding. Soon, gunshots ring out, followed by even more, and continue to grow both closer and louder until they abruptly stop. This symphony of war is also aided by a Hans Zimmer soundtrack that doesn’t so much as support the movie, so much as it becomes a part of the film as the music blends in with the sounds of war that the movie creates. This opening sequence (which is far and away the best opening sequence of the year) sets the tone for the rest of the film as Nolan creates sequences in the film that are just as impressive and exhilarating as the ones that came before it. By relying more on practical effects (another Nolan staple) s

uch as real-life warships and fighter planes and some truly stellar sound design and editing which brings all the terrifying sounds of whizzing bullets, roaring planes, and loud explosions to life, Nolan successfully creates the most realistic depiction and sound of war to date.

Another, much less appreciated aspect of Dunkirk is in its approach to its characters inhabiting the film. Most of the complaints involving Dunkirk almost

always involves the films characters, or as some people claim, the lack thereof. While the characters in Dunkirk are not the most fleshed out or relatable group of soldiers put to film, to say Dunkirk does not warrant the care of the viewers does Nolan and the movie a disserve. Dunkirk is first and foremost a film about survival, whether that be the survival of flesh and blood soldiers or on a grander scale, the survival of the hope of a nation facing utter defeat. With this in mind, Dunkirk becomes just as rousing of a film as say, that of Saving Private Ryan, by finding the few moments of hope that the characters of the film are striving to hold onto, fight for, and even rescue.

All in all, Dunkirk enters one of the most impressive list of nominees for Best Picture in quite a long time. However, the film has enough merit and just enough uniqueness, if not more than a good handful of the other nominated films (The Shape of Water and Get Out now withstanding). With one notable exception from the nominees (cough Blade Runner 2049 cough), Dunkirk is the most well-made film in nearly every aspect. With Dunkirk, Christopher Nolan has indeed maintained the survival, as well as create a sense of hope for the future of big budget summer blockbusters, a feat in and of itself.