COME AND TAKE IT: Viewing The Texas Chainsaw Massacre as the Quintessential Texas Film

Texas, O’ Texas; Where the stars at night shine big and bright. It is a land of tremendous pride and an even more tremendous sense of individualism. It is from this Lone Star State that a little film made from nothing shook the world and changed the landscape of horror filmmaking forever.

1974’s The Texas Chainsaw Massacre left an indelible mark on the New Horror scene of the 1970s and everything since. The movie treads the waters of existential dread with the gritty eye of documentary-realism and as Rex Reed, the film’s original defender, once wrote, “This film is positively ruthless in its attempt to drive you right out of your mind.” What Tobe Hooper and Co. accomplished was something often sought but rarely captured on film: pure cinematic chaos. It lacks pretension and lacks a certain cleverness often found in the genre that can ease an audience into remembering it’s only a movie, only a movie, only a movie.

The argument can be made that The Texas Chainsaw Massacre is the greatest American horror film ever made and many have done just that, but has it ever been viewed under the lens of an exemplification of its home state? Probably, but I’m going to do it again anyway. So come on, everyone, it’s going to be a fun trip!

So what makes a movie uniquely Texan? How does a flick about a family of cannibals represent the fundamental values of Texas? With a history of campfire-side oral tradition, we are a state of storytellers living in a land of tall-tales, and this is the seed at the heart of TCSM. John Larroquette invites the audience to believe that the story that follows is “truth,” the horrifying fate that befell five youths, all the more tragic in that they were young. That friend of a friend who says they knew someone whose uncle did time with the “real” Leatherface in prison is lying. The opening narration is bogus. It has become so ingrained in the culture because the film plays it completely straight, and the scale is just small enough to make this claim completely believable. The villainous family contain aspects of the Sawney Bean clan (the cannibalistic subjects of 13th century Scottish folktales) and the Ghoul of Plainfield, Ed Gein, but other than these tiny inspirations, the entirety of the events in question are straight from the minds of the filmmakers. 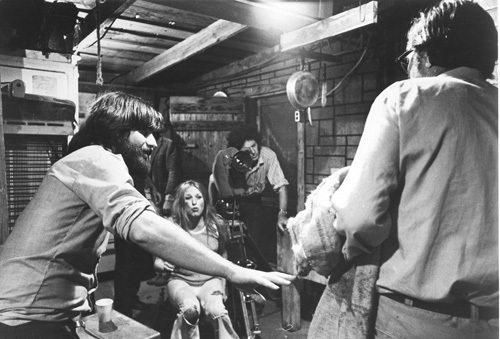 In fact, the family (unnamed until sequels revealed them to be named the Sawyers, which, for the sake of clarity, I will refer to them) seems to embody the darkest extremes of many Texan values. For one, the Sawyers are the strongest family unit portrayed in the film. Sally and her irritating brother Franklin are at each other’s throats from the very opening, and while the Sawyers are certainly violent and abusive, they still support and protect each other. They cook and clean up after one another, figuratively that is. They respect their elder and even admire their infantile grandfather, granting him the honor of killing Sally. Or try to, anyway.

We are made privy to the fact that the family was once employed by the slaughterhouse, until deemed unnecessary with the invention of the cattle gun and set out to pasture. The Sawyers then take it upon themselves to create a sustainable family business in the production and distribution of a popular Texan cuisine: barbeque. If it weren’t made of people, this would be a rather inspiring, yet quaint, tale of American dreamers overcoming all obstacles. The Sawyer clan, comprised of the Cook, the Hitchhiker, Grandpa, and Leatherface, represent it all: our obsession with food culture, the idea of the family business, ideals of self-reliance, liberty, pride, rebellion, and a ‘cowboy up’ mentality. They are the ones living on the edges of society.

Aesthetically, the film captures the ungodly heat only a sweltering Texas summer can conjure. Every frame appears to bake in that red-hot radiance and drip with sweat. It feels as prickly as mesquite and as arid as the hottest day of the year, something the 2003 remake ditches entirely. That film’s motif is dripping, wet blues, something which seems totally incongruous with the context of the picture. 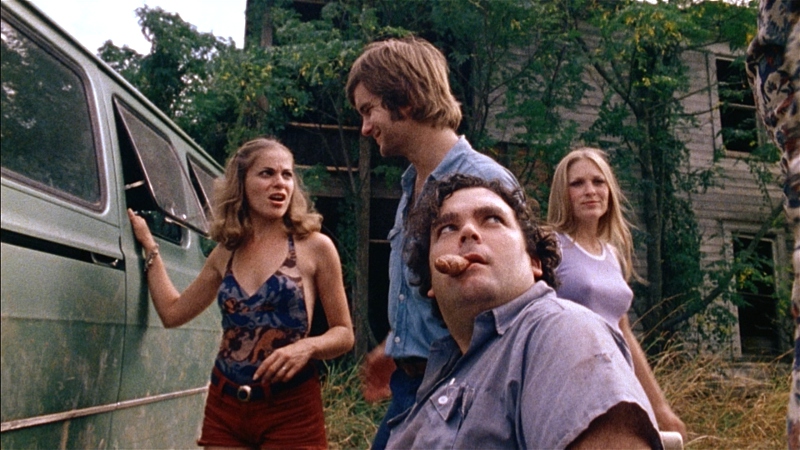 What took place behind the scenes is just as fitting to our inquiry as what happened within the frame. The film and its makers secede from sanity. Tobe Hooper, fresh off the disappointment of his debut art film Eggshells wanted to make a successful follow-up and knew horror was his best bet. So he, along with a screenwriter who subscribes to conspiracy theories surrounding the Illuminati, set out to make a dark comedy called Head Cheese. This later became one of the best-titled films in history in The Texas Chainsaw Massacre and one that sports the single greatest tagline in history: “Who will survive and what will be left of them?” The art director assembled beautiful set dressings, made from real human skeletons and road kill, and the infamous family dinner scene was shot over the course of twenty-six hours in a poorly-ventilated room in the middle of the worst heat wave in the history of the state. The filmmakers were out of their minds and it shows in the final product in a beautifully delirious sort of way. When Marilyn Burns is losing it at the film’s closing with Leatherface dancing against the brilliant sunset, she really is going insane in the bed of that pickup. She could scream no more, all she could do was laugh, laugh at the absurdity of it all. That ending is one that sends shivers up your spine because you can feel its sincerity.

Even the post-production, in which our indie heroes from small towns with big dreams were swindled by big-city hucksters, earns a uniquely Texan distrust. Not having any idea how to distribute a movie, the filmmakers fell in with Bryanston Distribution Company, which turned out to be a front for the Mafia who then used the film to launder money made from 1972’s Deep Throat. They were compensated so poorly for their work because of convoluted loopholes that it was years before anyone involved with TCSM saw any profits from it.

For anyone who has ever driven through central or West Texas, watching The Texas Chainsaw Massacre feels like the Texas everyone thinks of when they think of Texas. That desolate desert. That high, unforgiving sun. Those weird and wild outcasts. Is this the most Texas movie ever made? In the end I would have to say no. There’s not even a single mention of football.

Quiz: Which Horror Movie Is Based on Your Life?