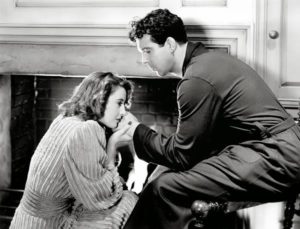 Watch this, not that. It’s what I tell anyone who says that “Christmas in Connecticut” is among their annual rotation of classic holiday movies.
Swap it, I tell them, with the less famous but far better Barbara Stanwyck Christmas flick “Remember the Night.” I confess that I originally watched “Remember the Night” because its title seemed to be telling us that nights are things not to be wasted; a racy reminder for 1940. And while one scene, shot entirely in silhouette, is among the sultriest moments ever committed to celluloid, “Remember the Night” is in fact a heartwarming and hilarious love letter to the American Christmas. It’s a screwball comedy in which streetwise beauty Barbara Stanwyck plays a serial shoplifter who’s all set to spend Christmas in the poky until wholesome district attorney Fred MacMurray takes pity on the pretty petty thief. He gets her out on bail and the two adversaries inadvertently end up spending the entire holiday together. The couple’s attraction to each other gradually corrupt him while reforming her, and they meet in the middle. Unfortunately this Yuletide yarn isn’t streaming, nor are you likely to find it in stock at your local target. But cable subscribers are in luck because “Remember the Night” will be airing on Turner Classic Movies this weekend. To discover what may become your new Christmas tradition, be sure to remember Saturday night (12/22/18) at 7pm Central.