Lucas Martell is an award winning writer, director, and animation artist.  He is known of for shorts like “Oceanmaker” and “Pigeon Impossible“.  He is also a co-founder at his animation and post production studio, Mighty Coconut

What first inspired you to pursue filmmaking in general?

It was something that I’ve always been interested in, since I was a kid. I know that my first sort of experience in animation was probably when I did a bunch of flip-books and I kind of figured it out on my own. Don’t know if I had seen them somewhere, but I kind of just picked up these flip-books and, looking back, I think that was probably my first animation experience. I was also really into making my own computer games and doing animation very, very early on with a few basic projects and stuff. So, I started doing computer animations from a very early age, properly from age six or seven, and I had started doing little firework animations, just because I liked the technical side, but also because I liked the artistic aspect of it as well.

I didn’t really start doing film, or at least not seriously, until I graduated from college. I was a music major in school; I was a sax player. I was originally hoping to go into sound for film, but I fell into the actual filmmaking and digital effects/animation side of things.

Why animation over live-action?

I think the big thing was because I was doing it myself, and I always had these very large ideas and stuff that you could never do on independent level without it looking bad. With animation, it would take a very long time, but one person can create it alone. They can create some very large, epic visuals, and I used to joke that what I really liked doing was short animation, but in a far more similar style to what you would see in a blockbuster film.

Yeah, like Oceanmaker. I think that was part of the reason, and the other reason was because I was also a huge fan of Pixar growing up. I think a lot of that sort of seeped into my subconscious, so it wasn’t an active decision to choose animation, and I still sort of want to do more of the live action stuff, but my forte is definitely in animation. I love how creative you can be, whereas in live-action, you’re very restricted. You go out, you go shoot what you can, you have to shoot a lot of coverage, and sometimes stuff doesn’t work, whereas with animation you start with storyboards and editing. You start at the end of the process, and from there you’re refining it and you’re never going back like, “well we just never got that take that we wanted”. With animation, you can be a lot more in control of what’s happening in the film.

Yeah, that’s a big part of it. In animation, your big limitation is time. If you’re a [live-action] independent filmmaker, you can go shoot an independent film for probably around a hundred grand and probably have it look really good. You can probably get good actors and although you might have to beg and steal a little bit, you can get it done.   In animation, the barrier to entry is so much higher, just because of the amount of time that’s involved. Doing an incredibly low budget feature animation is still going to be a number that most independents would sort of balk at, and a lot of that is because it’s so time-consuming. Our idea of inexpensive is like $5 million or so. That’s about as low as you can get the cost for a feature that we would do. That’s just the nature of animation at the moment. And that’s incredibly cheap for the type of animation we are doing.

If you don’t mind me asking, what was the budget for something like Oceanmaker?

Well that’s an interesting question, and this is one of the things that you can do with a short film; you can, because it’s for such a short period of time, get people to pitch in.   You probably saw the Belize destination production for Oceanmaker. That was a way of getting the key artists that we needed the time that they needed to sit down and work on it. If you were paying their normal day rates, mind you, if we had been doing that to a more commercial level, the budget for that would’ve been close to $300,000 or $400,000. But, a lot of that was sweat equity from everyone involved, so it ended up being quite a bit less out-of-pocket. But, on a feature film, you can’t do that, because it’s for such a long period of time. People, however, can take a few weeks or a month off to work on a project. People can’t put sweat equity in for years on a larger project.

I want to shift gears little bit and talk about your style of filmmaking. Most of your shorts do not have any dialogue, and I’m wondering if you started out trying to do that, or if it was just the nature of the stories you wanted to tell.

I have no problem with dialogue. It’s just that up until now, I felt like it was the best way and I wanted to stay in that long tradition of animated shorts that had no dialogue. If you look at the mainstream Pixar shorts, almost all of them have no dialogue, and it is a very accepted style. It’s because we realized we didn’t really need any other dialogue, it didn’t add anything to this story (because there was a version we had at the very beginning of Oceanmaker that had someone setting up some world stuff), and it would have taken away from the cinematic and much more visual approach. The other thing, from just a business standpoint, doing it without audio is great because then you can play it at international festivals, and it travels really well on YouTube or Vimeo, you don’t have to dub it, because it’s so universal.

You’ve been nominated for, and won, many awards for your work in animation as well as in shorts. I’m just wondering how that impacts you as an artist. Does it help you keep pressing on, is it encouraging, or is it one of those things that makes you want to keep going bigger?

I mean awards are great, but, for any self-respecting artist, it’s not why we do it. For me, the ultimate goal is to do something bigger and better and looking toward the next project and that next story. They can help you get to that place that you can’t get to easily from where you are now. Two big things that I’m working on right now are a handful of episodic series (they’ll probably go the digital route) and I have four features in development (with either various studios or independent producers). So, I definitely want to do the bigger projects and that’s the kind of thing you can’t do alone and hopefully having a few shorts under my belt is enough to kind of convince the necessary stakeholders that I, and we as a company, can pull it off. 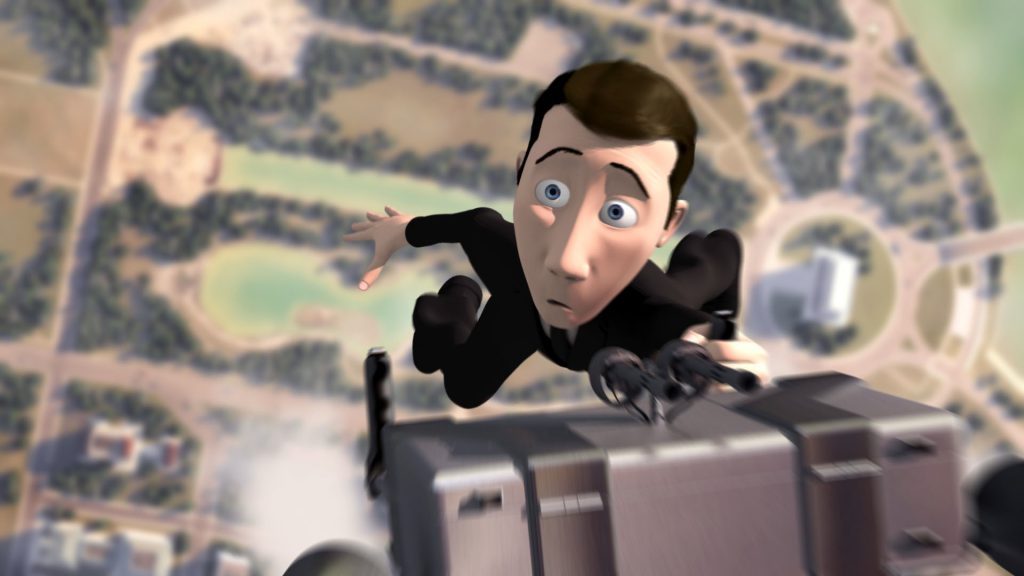 You mentioned that you have a lot of things on your plate right now, But if someone handed you a blank check what would you make would that look like for you?

I have a couple things right now. One of my big things is getting the Oceanmaker short turned into something else. We were thinking about turning into more of a digital series, because the animated feature space right now is so crowded, and the cost just to market and distribute those is so expensive that Oceanmaker just doesn’t quite fit what a lot of people think an animated film should be. That was one of the things when I made it that I really wanted to prove: that there are other types of stories to make with animation. The reality is that convincing the necessary studio people is a much harder task, and one of the things that we are finding is that in the digital space, even though you don’t have as large a budget, the freedom that you’re allowed is incredible.   You’re not required to fit every single decision into a defined box that everyone is expecting a project or animation to be. So right now, Oceanmaker is my biggest priority, getting that longer version, or that bigger story made.

You mention the digital space and distribution for animation, which can be a more difficult product to sell. I know Netflix, Amazon and other streaming content sites are picking up content from festivals and other places. Is that the direction you’re going, or do you mean something else when you say digital space in reference to distribution?

That’s one of the main sites we’re looking at along with the traditional networks and cable as well for some of these episodic series. I would say the digital space right now is so ripe, and that’s where a lot of the experimentation is happening because the rulebook is still being written on what works and what doesn’t, as opposed to features where you are trying to convince studios to fund and make a feature. In that scenario you’re always doing the battle of trying to show who’s done it successfully before because they’re so risk averse. In the digital space, there’s not that precedent, because people haven’t been doing digital series for so long that the powers that be are much more willing to try to take risks because they know that everything that they do is sort of an experiment. It’s still a little bit of the Wild West, in the digital world.

What would you say to people who are trying to break into the industry, especially into animation?

I would say learn as much as you can, in a variety of areas. One of the things we continue to find that separates people when we are hiring or collaborating is their experience outside of animation. In animation, all the arts are represented: drawing, painting, choreography, and even music. For younger people, do a little bit of everything, and you’ll find what you’re naturally best at.

You can find more of Lucas Martell’s work at: