The Curious Case of Benjamin Button is not a Christmas movie. It’s not even Christmas
adjacent, ala Die Hard or even Iron Man 3. In fact, there is not a single scene in David Fincher’s underrated masterpiece that displays even an ounce of the holiday. The only connection between the film and Christmas is the release date, December 25, 2008. But The Curious Case of Benjamin Button is a Christmas movie to me, not because of the date it was released on, but because of the “spirit” of the holiday that it carries within. 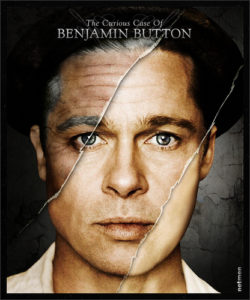 The film itself, the story it tells (based on a short story by F. Scott Fitzgerald), is one that
is both whimsical and tragic, telling the story of a man (played by Brad Pitt) who ages
backwards. But the way the film is told and the events of the overall story contribute to create that feeling of Christmas, that of comfort, joy, nostalgia, and even sadness. Christmas is the cumulation of the year and every Christmas, people who may have been with you one year, may not be there the next. Christmas is about family and loved ones. Benjamin Button is also about the cumulation of things, but in this case, of one man’s life: the joys and wonder of being a child, the anxiety and excitement of being a free young adult, the constant presence and occasional involvement of death, and finally, love and all that comes with it. Benjamin Button is like watching one extraordinary family members life unfold through a home movie: the picture is soft and yellow, the memories are hazy, occasionally grand, but all the more pleasant, and when it ends, it feels like being pulled from a dream.